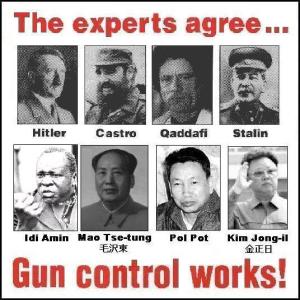 It will never happen here? I bet the Aussies said that too!

While figures over the previous 25 years showed a steady decrease in armed robbery with firearms, this has changed drastically upward in the past 12 months, since criminals now are guaranteed that their prey is unarmed.

There has also been a dramatic increase in break-ins and assaults of the ELDERLY. Australian politicians are at a loss to explain how public safety has decreased, after such monumental effort and expense was expended in successfully ridding Australian society of guns. The Australian experience and the other historical facts above prove it.

You won’t see this data on the US evening news, or hear politicians disseminating this information.

Guns in the hands of honest citizens save lives and property and, yes, gun-control laws adversely affect only the law-abiding citizens.

Take note my fellow Americans, before it’s too late!

The next time someone talks in favor of gun control, please remind him of this history lesson.

During W.W.II the Japanese decided not to invade America because they knew most Americans were ARMED !

Admiral Yamamoto who crafted the attack on Pearl Harbor had attended Harvard U 1919-1921 & was Naval Attaché to the U. S. 1925-28. Most of our Navy was destroyed at Pearl Harbor & our Army had been deprived of funding & was ill prepared to defend the country.

It was reported that when asked why Japan did not follow up the Pearl Harbor attack with an invasion of the U. S. Mainland, his reply was that he had lived in the U.S. & knew that almost all households had guns.

If you value your freedom, Please spread this anti-gun control message to all your friends!

4 thoughts on “Why Gun Control Scares Me”

Mother Speaks Out, Help Our Children Take Off The Masks